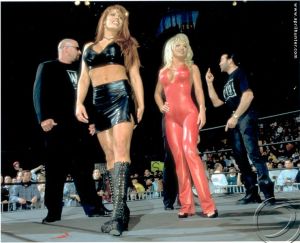 (This is an older blog I’d written about my very first weekend in the wrestling business. I was recruited into WCW through Playboy and not the least bit trained when I was hired. (Thankfully, my parents raised me that me that you introduce yourself to people and shake their hand…which is probably part of the reason why I’m the ONLY girl of the six originally hired still in the business. That, and insanity.) These were my first impressions when I started working in wrestling and my first of many WCW Tour Diaries that are on my site now.)

Why is wrestling so popular? It now gets better ratings than Oprah and Springer together. Maybe it’s the classic good versus evil, larger-than-life super heroes who battle it out in the name of right against wrong. A world where tough, sexy, muscled babes live whose chest proportions defy what nature intended. Where the winner of the fight gets all the girls, glory, belt and lives happily ever after until needed or challenged again. Sex and violence rolled into one big happy two hour time slot of fantasy. This is the stuff every comic book is made from. And when it’s performed live, it’s called wrestling.

I’m going to start from the beginning, and you can come along for my ride. All that worrying and stress for nothing. When I got back from England just in time to start with WCW, I ended up having an absolute blast — and can’t wait to do it again this Monday night. I wish I could be as detailed as I’d like to be, but it would go on too long and I’d get into trouble spilling things I shouldn’t. So, I guess you’re just going to have to wait for the biography for the fill-ins. Until then, here ya go…

In my years of flying, I’ve come to two conclusions. First being that the airlines deliberately try to make you so freaking uncomfortable, they’re attempting to force you to spend triple to go to first class. And secondly, that people on these flights are disgusting. They cough without covering their mouths, pick their noses, eat like pigs, drop their seats back without any concern for the person’s kneecaps behind them, and become demanding to top it off. And each year, people seem to be getting fatter and fatter. My seatmate this time was no exception. He graciously allowed me to have half my own seat for the 4 hour trip to Buffalo on this fully packed flight. And he was sweating. Ick. (Sometimes I wonder: are humans like goldfish, able to grow as large as their environment will allow them to? That would explain why the English are so slight and Americans are so bloated. We have to fill out our homes, 3-lane highways and SUV’s. Don’t get me wrong… I don’t care if someone is heavy. Eat all you want. Hell, you ain’t making a living naked, so go for it. But when it cuts into my own personal space, like coughing or smoking, and I didn’t ask for it, then it’s just fucking wrong. And I just might smack you in the face, depending on my mood and how much sleep I’ve had. You understand, right?)

And lastly, how the hell is the seat being in the full upright position (not that I recline it, because I hate having it done to me) going to save my ass any quicker were there to be a crash?

I checked in, and was impressed. Classy hotel! The nice thing about being on a Per-Show pay scale with WCW is that they pick up the travel tab, where if I were under full contract, I’d have to pay hotel and rental car expenses. Those really add up.  In every other pro sport, costs are paid by the team and medical expenses are covered. Except pro wrestling. Then again, in every other pro sport, they get an off season.

I don’t understand how this business can be drug tested like a real athletic sport, but not given a SAG card like in real entertainment.  You’re self employed, so you have to pick up the tab on everything, but still have to work the schedule you’re told.  People make fun of it as if it’s fake, yet wrestlers limp around with some of the worst injuries and no off season to heal.  With few places to work, you literally have a 20-70% higher chance of becoming a film or TV star than nabbing a coveted spot on the few hours of aired wrestling TV each week.

It’s the most unfavorable of everything. You just have to love it…or be completely crazy.

The first thing I did was look out my hotel window-wow. Huge fleets of TNT trucks are right outside. Sid F’N Vicious was on my flight and checking in with me! The reality of what I’m about to do sets in… 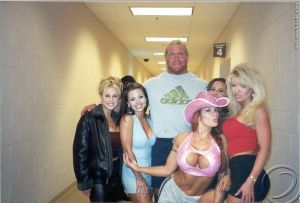 Getting up early on Monday, I called Kim and Tylene and we decided to meet at the tiny hotel gym. One of the Nitro girls was there doing cardio. She pretended we didn’t exist. I’d heard the Nitro girls were quite standoffish, but was surprised nonetheless.  Meh. Whatever. I was just here to have fun and work. We showered and headed to the arena by 1pm. First things being first, we were dying to check out what the ring was really like. All of us jumped around imitating wrestlers and did cartwheels for a few minutes like three dorks. It was harder, smaller and higher than it looks on TV. (Sounds like a bad porno description, huh?). The ropes (actually cable wrapped in rubber tubing) were very stiff. And the mats on the floor were pretty damn thin. In other words, I wouldn’t want to take a fall on this. My respect grew even  deeper.

Another thing I noticed were that the wrestlers looked a lot healthier and leaner in person. Most were pretty cool and not much like the character they portray. I particularly liked Meng, Booker T, Buff Bagwell, Medusa, Asya and Bret Hart. Admittedly, it was sort of strange to see all these people who I’d been watching on TV for so long in person and being that down to earth. I mean, there I was, in the middle of the N.W.O. and working next to the legendary Terry Funk! After reading so much about him in “Have A Nice Day” (by Mick “Mankind/Cactus Jack” Foley – I highly recommend this book to everyone, even non wrestling fans will enjoy it) and seeing Bret Hart’s tape, it was very surreal. I even got to see Jimmy Snuka fly off the cage my very first night. 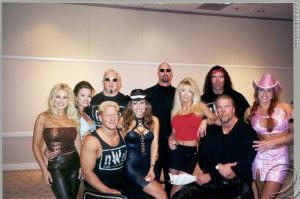 It came time to get into makeup. We had a pre-taping to do. The story was something along the lines of Steiner having a birthday and we were the ‘hoochies’ brought in as a set up to get him drunk and weaken him with good loving so he’d be too weak to win. All the backstage stuff you see is pretaped around 4 or 5pm before the show starts. We didn’t even have a script until shortly before that. It’s a fly-by-the-seat-of-your-pants kind of show where they post the night’s matches on an erasable board in the back, and they seem to make it work.  (Kind of.) When the guys do get the script, they’re all in the hallway with the writers, working out last minute changes. Many ad lib live. It does take a lot of talent to memorize, spew, and pull off unrehearsed moves with another without much thought or time. And to do it LIVE. The arena was PACKED. I almost froze when I saw the amount of people I was to walk out in front of. All I could think was to not trip over the grate in high heels and I hope a boob didn’t fall out. I also couldn’t get over the amount of kids in the audience. As someone who has catered to a mostly adult 18-35 male audience in my varied careers, I found kids to be a little strange.

Tylene, Kim and I were seriously given the once over in the back by some of the other girls. And on our first night, we were lucky enough to get quite a lot of airtime, something that increased the tension even more when we got back into the ladies locker room. If ya know what I mean…

When we left that night, we were giddy from having so much fun. Being the only girl from the northeast, I was elected the driver. The west coast girls (where I currently lived as well) weren’t used to the highway on ramps and aggressive drivers. Of course, I proceeded to get us extremely lost in downtown Buffalo. We decided to go the hotel restaurant for a drink and dinner. Apparently, so did everyone else. Fans and wrestlers alike. I was most impressed with Diamond Dallas Page and Buff. Both were hounded relentlessly for autographs all throughout dinner to the point where they couldn’t even eat. And both handled it graciously, signing every scrap and napkin placed before them. Even Tylene and I were stopped in the hotel hallways by a few guys and kids and asked to sign. I couldn’t believe it was starting that fast.

The next day we got up early to start the drive to Erie, Pa. Hellish. Snow and ice held us back and we arrived an hour late. I asked around for the script, but no one had it yet. And no one could tell me what the plan was. When I explained my dilemma to someone, they just patted me on the shoulder and said, “Welcome to the WCW.” Kim had left her wallet at a rest stop somewhere along the way from New York and was freaking out. Believe it or not, a guy called the arena (she’d told him where she was headed when she asked for phone change) and drove the wallet all the way to her, with all her money in it. My faith in humanity was restored. Since I couldn’t find out what was going on, I sat in the arena, asked the crew questions and watched them set up for the night’s Thunder show. Did you know they have four different stage set ups, with a different ring for each? One for Nitro, Thunder, WCW Saturday Night shows and Pay Per Views. I found the backstage people very interesting, and realized most of the show ran as well as it does because of their time and expertise.

We soon found out we weren’t in that night’s script. Damn. Hell and high water to get there, but no show time. Sort of like getting the roses, doing the foreplay, rolling on the condom and then being DENIED. Ah, well.

Packed up again and headed out. Steiner, being a decent guy, helped us carry our bags. He seemed sort of bummed our bouncing breasts wouldn’t be making a second appearance on the show that evening. When we got to the garage, we found kids surrounded the building. I mean, SURROUNDED. Even from that far away, they spotted him and started screaming, “Steiner, Steiner!”

It’s fun playing a bouncing hoochie, but I hope they let me play something a little more badass and bitchy eventually. I know I have to work my way in and get my feet wet first, though.  But for me, I’d need more than just a paycheck to be happy here. I’d need to feel like it was a challenge or fun.  I’ve never been a “just a paycheck” kind of girl, so I hope this isn’t that kind of place.

(As history proved, it sort of WAS that kind of place.)

You can read the entire series of WCW diaries here: http://www.AprilHunter.com