He said, “I’ll be there tomorrow.”

Excitement. My heart beats. I smile.

Then panic. I did not like the fact that someone had the ability to make me feel this way.

A lot scares me.

Having control is key. Key to focus. Key to life. Key to sanity.

Someone else making me happy is not having control.

When I was safe inside a relationship, there was control. There was the comfortable glide. There was security.

This is none of that. It’s up, it’s down. It’s long distance. It’s uncertainty.

It’s a hole in my heart.

It’s wanting. And not being able to have.

It’s being attached to the phone.

He exists in there when he’s not here.

His face, his words, our moments.

I had wanted unplug more. 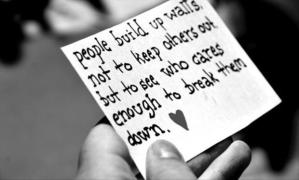 How did this happen?

I’m usually so careful. Removed. Warm, yet cold. It’s hard for me to really care.

I’ve gotten it down to an art.

Smile. Converse. Drink wine. Ask them questions about themselves.

Sure, sure. Let’s do this again soon.

Let me check my schedule.

I’ve become more and more like a man in so many ways. I was raised by a man, I work with men, I have turned into one.

I’m not selfish. It’s self preservation.

Truth be told, most people aren’t worth it.

There exists a carefully cultivated fuck-you shell around me.

“You’re nothing at all like I’d thought you’d be. You’re smart…sweet.”

It’s a common comment I hear from people who make it past the muscle. The blunt truths. The loudness. The vibrancy.

I have a lot to give. I can’t afford someone who takes.

I only want real in my life. Not so easy to find.

He was different. His words alone were atypical.

He was strong. He was used to being the one to do the intimidating.

He had his own uniquely cultivated shell.

He got into my head. I couldn’t get him out.

We were a lot alike.

Maybe too much alike.

He said, “You’re so different than I’m used to.”

He said, “How bad are you? I’m asking because I really like you and want to know.”

Extreme. Rapid cycling. Out of my mind. Crazy. Bipolar.

He said, “I’m being recruited. The job is across the state. I have my second interview this week.”

I wanted to run. But I didn’t.

But I wanted to.

I allowed myself to breathe.

Then one day he said, “I can’t do this right now.”

There are issues about myself I’ve always had. I’ve been working on them and thought I was all right. Mentally…I’m not.”

I suddenly realized that I’ve been him before.

I’ve done this to others.

I hated how it felt.

I felt raw and ripped open.

I’d hated how I felt when I did it to others.

It’s taken this to make me realize what I’ve done.

What I’ve done to those around me.

I wanted to help him. But I can’t.

I know from being me that only he can help himself.

And I was right.

He made me sad.

It’s such a cliché. When did we become a cliché?

We never did conform to anyone else’s rules.

We always colored outside of the line…but now we’re THAT.

I told you…I never wanted to be that couple sitting across from each other at the restaurant,

Not talking. Not looking at each other.

My mind races and I can’t sleep.

I never could. Thoughts come faster than I can get them down.

Being this way…It’s a curse. It’s a blessing.

I know people don’t get me. They can’t.

I know I may die young.

I know I’m smarter than most.

I know I do dumb things.

I know my father was this way, too.

I got this from him.

Well…I have trained, read and learned.

It’s simple. You decide how you will see things.

I know I can be happy.

I don’t think you can.

When you are already past the age of where you could be dead, every day is a gift.

What should I do?

I don’t want to live like this. But I can’t imagine life without you in it.

We are two good people who bring out the worst in each other.

You look at me, but you don’t see me. You see an illness. That’s all I am to you now.

I don’t want that.

I don’t want to be looked at like that.

A dog loses his leg and learns to walk again.

No one is in his ear, all day and night, telling him what’s wrong…how he’s a poor thing…there’s something wrong with him.

He just gets up and walks.

Before this, I was just me. I’m still me.

And I’ll be fine.

Without you…I think maybe I can walk again. 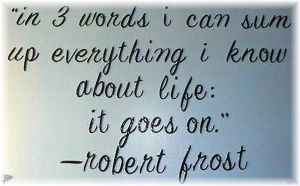